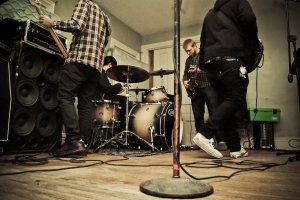 My brother has been a musician in some local and regional bands for probably a decade now, and I’ve met a lot of people in the punk scene from going to shows with him. Somewhere along the line, I realized that these were a rare breed of people: They were going after something they loved, knowing full well that they probably wouldn’t make a living that way. Perhaps more importantly, they seemed, as a whole, to have a humility and openness about them that seems to be lacking in my usual circles. (Disclaimer: I spend most of my time around aspiring scientists and doctors. I’ll reserve another post someday for talking about why they have reason to be less than super friendly to the competition in their fields.) Nestled in with the fist-flinging dance moves and the yelling vocal delivery, I decided that these people had a certain wisdom that I wanted to take away to my own creative endeavors.

I don’t mean to criticize writers, many of whom may already be trying to collaborate and form these sorts of alliances. Musicians may have stumbled upon these techniques sooner because their art form requires them to work with others (for example, one artist usually needs a whole band, and a small band can’t play without joining a lineup, etc.), but I believe it’s time for our art form to pay attention to the lessons of theirs in order to adapt to the modes of consumption of the 21st century.

Do you agree? Disagree? Want to help with my “label” or want to give me some choice words? Message me or give me a comment below and let’s talk